Our friends of MLS en Espanol.net told us that Marcelo Gallardo could be coming back to Argentina if Daniel Lalin gets elected as the new president of Racing Club de Avellaneda.

Daniel Lalin has publicly said that he wants to bring two of the “Argentinean stars” back to the league and Marcelo “Muñeco” Gallardo would be one of them. The other one would be Mario Pavone (forward, Betis).

So, if an Argentine team comes knocking for Gallardo, should DC United listen?

Where will Benzema end up?

Soccernet’s Dominic Raynor is right about this - Lyon’s Karim Benzema will not be in France much longer. I’ve watched a bit of him since getting Setanta and he has looked world class. I suspect that he will be No. 1 transfer prospect during the Winter transfer window and likely to command one of the highest fees. The only downside is that he is cap-tied from appearing in the 08-09 Champions League, but I doubt that will prevent any of the big European powers that feel they need a striker from going after him.

Who in Europe needs a striker bad enough to spend what will be a boatload on him? I suspect Barca might be looking for a replacement for an aging Eto’o in the middle of its three forward formation.

At least he is according to the Insider.

According to two sources close to the club, D.C. United is in negotiations with goalkeeper Louis Crayton, who has played for eight Swiss clubs over the last 11 years and made 36 Liberian national team appearances.

A deal “is not final yet,” one source said.

According to the big W, he’s 30 and 5-11, and has bounced around Switzerland and most recently was the backup at FC Basel. He also appears to be a devoted Christian.

If you know German, a Swiss interview with him is below. END_OF_DOCUMENT_TOKEN_TO_BE_REPLACED

Let’s speculate about the new goalkeeper

*Three sources tell me this morning that D.C. United is in the final stages of completing a deal with a foreign goalkeeper. I have no other details to share at the moment, other than one person saying that the player’s nationality “will surprise you.”

I am going to take a guess and say that the surprise is that the goalkeeper is British. Everyone naturally assumes that DC will sign a Latin guy, but I think the team probably realizes that in order for this new guy to acclimate with our defense, he better speak English (unlike Carvallo). He specifically calls the goalkeeper foreign, which rules out Pickens or Keller. I suspect it’s going to be a backup keeper from the Football League or SPL. Though maybe that guy from Monaco is still a possibility.

Who do you think it will be?

DC needs a new goalkeeper: Talk Amongst Yourselves

Let’s keep this one short and simple… DC needs a goalkeeper. Who will it be, Matt Pickens, that random Monagasque guy, or someone we haven’t thought of? Consider this an open thread and discuss amongst yourselves.

Assuming that he gets regular starts, I like this move for Boca. He’ll be back playing in Europe, and Rennes look fairly safe in getting to the UEFA Cup, only needing to beat Tavriya Simferopol (Ukraine), MIKA (Armenia), or Tiraspol (Moldova) to get there. If he can’t get on the field there, then it presents a big problem. Hopefully he and his management have recieved assurances that he will be playing rather than sitting.

United has to let Ronaldo leave As much as it pains Sir Alex and co., Manchester United is going to have to let Ronaldo go unless they want to risk long term damage to their club and reputation. As EPL Talk says, it’s really obvious he wants to go and when a player of his calibre wants to move, he’ll get his way. It’s the way of the soccer world right now.

Sure United could refuse any offers, but then Ronaldo could pout or get injured thus slashing his value enormously. United could also conceivably hold on to him, but bolt his rear to the bench. That would damage the club’s reputation among players and agents who wouldn’t want their careers slashed and burned by the Scotsman.

You hope that someone at United has the ability to veto Ferguson if he does have this “nuclear” option in mind. Someone has to prevent him from cutting off his own bulbous nose in spite of his very purple face. 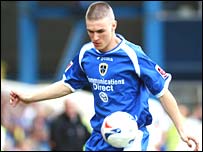 Arsenal has signed the young Welsh prospect Aaron Ramsey from Cardiff city for about £5M. Arsenal signed him from under the noses of both Manchester United and Everton? Here’s how they did it. END_OF_DOCUMENT_TOKEN_TO_BE_REPLACED

I hope I speak for all Arsenal fans when I say:

I am feeling pretty good about Arsenal’s apparent impending signing of French international Samir Nasri from Marseilles. I’ll admit, I dunno much about him. But from all I’ve read, he looks like a real star in the making and one who is a bit more agressive and assertive than our recent wing-side poodles like Hleb and Rosicky. Nasri highlights after the jump. END_OF_DOCUMENT_TOKEN_TO_BE_REPLACED