On Red-Out and Red-Haired Stepchildren 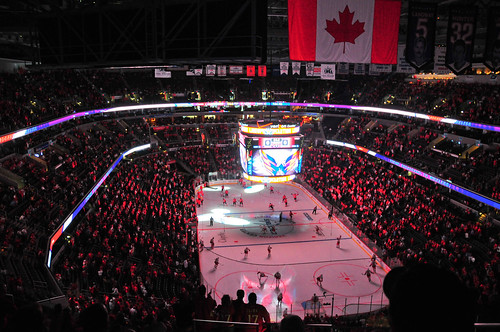 Well, the Caps played their guts out but lost in overtime. But they did not choke. A young Caps team faced adversity and fought its guts out to take the series to seven games. The traditional Caps response would’ve been to roll over and die, but not these guys. God bless ‘em.

It was tough to watch, but, with so much of the team coming back next season it’s hard not be optimistic. The only real worry spot if what they do at goalie. Do they sign Huet? Do they sign him long term? Do they sign a different guy as a short term fix before the young guys emerge from the minors? The other questions (like Fedorov) aren’t so crucial. Anyway, it was a miraculous season and I can’t tell you how great it is that the Caps are relevant again both in the NHL and more surprisingly in DC. It was a fun ride. And… they actually didn’t choke. END_OF_DOCUMENT_TOKEN_TO_BE_REPLACED 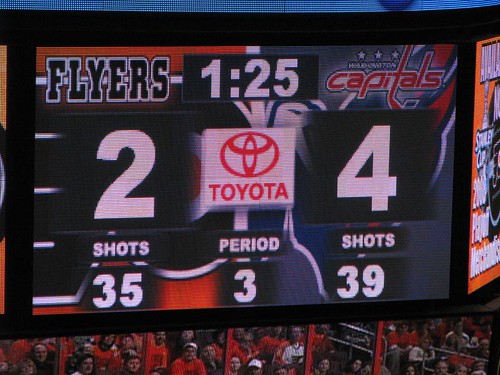 The Caps came back again to beat the Flyers last night in Philly. As anyone knows, Philly fans turn on their teams faster than any fans anywhere, and that includes New York.* The local media of course loves to pile on as well. Here’s some clips of the Inquirer’s live blog of the game. These start at the beginning of the third period. END_OF_DOCUMENT_TOKEN_TO_BE_REPLACED

This video on OFB sure helps make ya’ believe.

That pain has returned

They’re back. The Capitals are back in the playoffs. I am a nervous wreck. Just like the old days. All I need is Ken Beatrice telling he how tonight is the “World’s Fastest Sportscall” because the playoff game was on next. END_OF_DOCUMENT_TOKEN_TO_BE_REPLACED

Is Patrick Roy’s son a psychopath?

Roy’s son, Jonathan Roy, is in deep trouble for his insane performance in a Quebec Major Junior League Brawl last week. The video is below, but Roy’s kid is the goalie who wants to fight really bad, and then pretty much assaults a disinterested opposing goalie.

The Remparts were losing badly in a playoff game on Saturday night with the Chicoutimi Sagueneens. The score was 7-1 late in the second period when a melee broke out in the Remparts’ end. Jonathan Roy skated to centre ice and appeared to challenge Sagueneens goaltender Bobby Nadeau to a fight.

While officials initially restrained Roy, he went after Nadeau in the Sagueneens’ end after the officials left him alone to go deal with other fights. Jonathan ripped Nadeau’s mask off and pounded his opponent. Nadeau just took the blows and didn’t defend himself.

As Roy skated away, he gave the middle-finger salute to the crowd at the Centre Georges-Vezina in Chicoutimi.

He then got in a second fight with Chicoutimi defenceman Sebastien Rioux.