“He’s been hurt again. I’ve nicknamed him the ‘White Tiger.’ He’s rare. He only comes out at Busch Gardens once every six months. Now it’s kind of like he’s the saber-toothed tiger. He’s been extinct.”

Who does that remind you of?

Warning - This isn’t at all soccer-related.

OG Barno: I doubt you’ll take a tough question like this, but here goes:

What do you think of Dan Snyder publicly calling out the Washington Post by name in his interview with Comcast Sportsnet last weekend? He, as well as thousands of WaPo readers, believe the Post is biased in its coverage.

I can’t remember a beat reporter ever having so many questions asked about their objectivity before.

What do you say to all those critics who believe your coverage of the Redskins is intentionally negative? END_OF_DOCUMENT_TOKEN_TO_BE_REPLACED

A place where “pro-rel” should be implemented

I have rambled on and on to every europoseur I run into all the various good reasons that pro-rel should and will not ever happen in Major League Soccer. I am not going to rehash all those reasons right now.

But the folks over at Unprofessional Foul have found a place where promotion and relegation should be implemented - college football. This is genius.

There is one place where relegation might be feasible, though.

College football already has a de facto tiered system. The six major conferences—the Big 12, Big 10, ACC, Big East, SEC, and Pac 10—essentially put together a cartel to control access to the large payouts of the Bowl Championship Series games. Simply by that act, they have not only defined the other conferences as lesser but also devised a means to keep them that way by making sure they don’t get much if any of the money that comes with the BCS TV contract.

There are provisions for teams from non-BCS conference to qualify for these lucrative games, and they have done it (see: Utah (2005), Boise State (2007) and Hawaii (2008)). But it’s more of a bone they’ve been thrown to pacify them and distract them from going to Congress and saying the BCS is anti-competitive.

But what if, instead of pretending like there isn’t this formalized inequality, college football embraced the elephant and just divided Division I college football into two tiers. Now, suppose they pair up each of the six major BCS conferences with one from this new second tier. So the Pac 10 gets partnered with, say, the WAC; the Big 12 with Mountain West, the Big 10 with the Mid-American, the SEC with the Sun Belt, the ACC with Conference USA, and the Big East with, well, we’re working on it.

For example, after going winless in conference—and the scenario I’m envisioning here has only conference games count in determining relegation and promotion positions—for the ninth time in the last last 11 season Baylor would have played BYU to see who gets the spot in the Big 12 and who toils in the Mountain West the following season.

The reality is that the novelty of watching lions slaughter Christians wears off pretty quickly. Sure the Floridas, Oklahomas, and Michigans are happy to pick up respective wins (and the cash from full stadia) against the Middle Tennessee States, the North Texas States, and the Appalachian States (oh… oops), but from a fan’s perspective, it’s really not good sport.

No, what’s far more compelling is watching lions fight lions. And if there were a weekend of nothing but Christians fighting Christians, with their BCS conference lives and paychecks at stake no less, that might be an ever better spectacle.

I would go a step further and eliminate that final playoff game. I would just use the regular season conference standings to promote and relegate. But I am just quibbling over details. This is great. It also might finally accomplish the goal of bringing OSU-Oxford, the branch campus, Miami U. in Ohio State’s league for a yearly beatdown. Just to show those preppies who is truly boss in Ohio.

What do you all think? 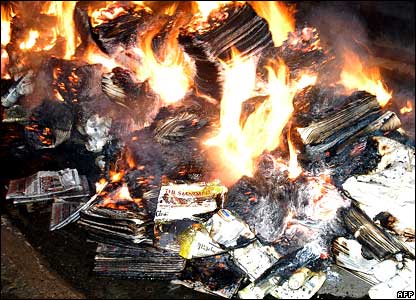 But at the urging of peeved Nats fans, Dan Steinberg over at the Sports Bog has investigated the matter of local teams (Part I, Part II) under served by the media and found that the Nats have nothing to complain about other than the team on the field.  END_OF_DOCUMENT_TOKEN_TO_BE_REPLACED

I talked to someone very close to the Ohio State football program yesterday and he was very concerned about the road ahead for young Mr. Pryor. The adjustment to college is not going to be an easy one after you’ve been told for so long that you are the greatest player in the history of mankind.

This can only go well.

Thank you once again to Deadspin:

You know, we’re starting to think that the only things that would survive a nuclear holocaust would be cockroaches, Kevin Federline and Matt Millen. And at least the cockroaches would feel kind of guilty about it.

That made me laugh way too loudly in my cubicle today.

Full marks to Deadspin for finding this. My personal favorite is a tie between Hoepnner and Zook.

Thoughts on the Super Bowl

In the immortal words of the Comic Book Guy:

No, Bears fans, you cannot win a Super Bowl with a quarterback who chucks the ball to the secondary whenever he runs out of other ideas.

Other quick thoughts on the game:

So, who’s ignorant now? Rex Grossman called out the analysts who wondered why he throws hideous interceptions and fumbles simple snaps, then responded in his defining game by throwing hideous interceptions and fumbling simple snaps. When challenged to win a sterling silver trophy in the fourth quarter, Bad Rex played like he didn’t belong. And if that’s harsh, let me remind him it was the Super Bowl and that he may never return again.

To be fair, Grossman is a young player who never should have been in this position and had no chance in this mismatch. Also, the Bears went 56 actual minutes between offensive snaps, having to wait out the marksmanship of Manning and the halftime screams of Prince. And so much for the theory rain would favor the Chicago team and hurt the dome team.

The Bears had their butts kicked and their brains picked.

Which means — gulp — that Denny Green was right. We will not crown their asses.

I’ll have more thoughts once I get home. Ttyl

PALOS HEIGHTS, Ill. Jan 22, 2007 (AP)— Nine months pregnant and married to a fervent Bears fan with tickets to Sunday’s NFC Championship game, Colleen Pavelka didn’t want to risk going into labor during the game against the New Orleans Saints. Due to give birth on Monday, Pavelka’s doctor told her Friday she could induce labor early. She opted for the Friday delivery.

“I thought, how could (Mark) miss this one opportunity that he might never have again in his life?” said Pavelka, 28, from the southwestern Chicago suburb of Homer Glen.

What I think fan’dom is

I have spent many years arguing with people that being a fan is not necessarily a lifelong unwavering commitment. Others say that you should always be there thru thick or thin. I agree, but that depends only what “thin” is. If thin is a good effort with players that are too old/young/non-talented but they go out there and try - then yes, it’s hard to go throwing the team under the bus. But what if the team is terribly managed? What if the team is arrogant? What if the team treats its fans like shit?

What if that team is the Redskins?

What if Daniel Snyder is taking advantage of the unwavering loyalty of Redskins fans to take our money and put dreck on the field?

What if, by supporting the dreck, you in fact enable it to continue?

This is the point Paul Doyle makes in today’s Guardian, though he makes regarding Liverpool and not the Skins. But his points stand up. Bolded emphasis is mine.

Here’s the unpalatable truth for anyone who admires what Liverpool Football Club once was: the club’s fans deserve to dine on the steaming dung they were served up last night. Because as a crowd (not as individuals), they’re dumb.

Midway through the second half of last night’s shambles, Liverpool fans began booming out ‘You’ll Never Walk Alone’ with such gusto that anyone tuning in at that precise moment would have assumed the home side were comfortably ahead. But, of course, they weren’t. They were being rogered 5-1. Once again, then, the Liverpool faithful, like the loyal sheep of certain other clubs, were wallowing in failure. And this morning many of them smugly expect everyone to congratulate them for that by agreeing that they’re “the greatest fans in the world”, or some such swill.

Belting out your devotion to a club when it is, yet again, blatantly underachieving is not being a “true fan” any more than cheering on an alcoholic every time he downs a jug of vodka is being a true friend. Like a man suffering from an addiction, a once-great club hooked on mediocrity and half-success needs a mighty metaphorical boot in the hole. It needs to be shaken out of its self-defeating stupor. Sure, when you see signs of a willingness to get better, then rousing outpourings of affection may be appropriate, but until that point is reached, you’ve got to be cruel to be kind (like I’m being here, see).

So let’s be clear: rather than pledge their allegiance to the unacceptable, Liverpool fans should have walked out en masse shortly after half-time in yesterday’s debacle. And made it plain that until they’re convinced that Liverpool could win the Premiership (nothing less should do) they will not be paying into Anfield, nor buying replica jerseys, official merchandise or Benítez’s guff about not having enough money to rival the big three (when you’ve spunked £6.7m on Arsenal reject Jermaine Pennant, £7m on one season wonder(ish) Peter Crouch and oh-my-god-how-bloody-much?! on busy-but-aimless strikers such as Craig Bellamy and Dirk Kuyt, do you really deserve to be entrusted with even more funds, even if they were available?

I couldn’t have put it any better myself. By continuing to support a team/organization/whatever that misperforms repeatedly, you only enable it to repeat. If Redskin fans really mobilized and began to publically embaress Snyder with boycotts, protests and stunts… they might be able to do some good.

Last season, season ticketholder to Middlesborough ran onto the field and lit his season ticketholder on fire in front of the manager. That’s what I mean. It doesn’t even have to be that dramatic, but fans have to do something. Otherwise, we’re just never going to get any better. How long will we wait for?

Why should they be any different?

Why should your standards not be higher considering how much you pay for tickets/parking/etc?

I know mine are.