And I’m supposed to feel good about this result?

Of course, that outraged tone could only mean one thing… I’m talking about Arsenal again. END_OF_DOCUMENT_TOKEN_TO_BE_REPLACED

Ince Out at Blackburn - Does it Matter?

… So, I’ve been wondering to myself for most of the day about the Paul Ince dismissal at Blackburn. I don’t think it can be characterized as a surprise. Blackburn are in the relegation zone currently and perhaps worse, are not really relevant in the Premier League this year. As a United fan, Blackburn used to be a game I would circle on the fixture list - only because on its day, Rovers could play with anyone and they seemed to come up with stirring performances against teams like Manchester United in the past.

Then I started thinking about it in a larger perspective. This past weekend was another in which the supposed top four teams in the Premier League all sputtered through their games, each earning a point - but with Arsenal getting jumped by Aston Villa for fourth place. It was a whole lot of blah, basically, and it seems to me at times that in a sense, this has been what the whole season has been. Maybe it’s a jaded perspective because United isn’t top of the league - but they haven’t necessarily been top of the league at this stage in recent years when they’ve won the title, so I don’t think that’s it. END_OF_DOCUMENT_TOKEN_TO_BE_REPLACED

Aaron is still in Denver - and I can report there’s no truth to the rumor that he is now part of the new coaching staff of the Rapids. Though if he can tackle at all, he might get signed to play safety for the Broncos.

Anyway, Soccernet is reporting that the shoulder injury to Theo Walcott of England and Arsenal could cause him to be out up to three months. It is left to question whether this is just bluster a bit on the part of the English press, and how significant the evidence is regarding Walcott’s possible absence.

Let’s argue for a second that the news is worst for Walcott, and he’s gone until mid-February (roughly). Once Arsenal manager Arsene Wenger gets over his rage about losing Walcott to an injury suffered in training for a friendly - I won’t say a “meaningless” friendly, because I don’t guess the English folks consider any match with Germany as meaningless, but anyway - the long-time leader of the Gunners is going to have some thinking to do. END_OF_DOCUMENT_TOKEN_TO_BE_REPLACED

The Red Bulls survived vs. RSL, advancing to the MLS Cup Final.

Thought I’d go over a few things tonight while Aaron is off in Denver.

First - I’d love to post a full breakdown of how the Red Bulls beat Real Salt Lake, 1-0, in the MLS Western Conference Final on Saturday night, but the truth of the matter is I only saw about the last 15 minutes of the match. I attended the Capitals game in New Jersey on Saturday night, and I don’t regret the choice, even if the final result wasn’t to my liking. God bless that nice Alex Ovechkin for at least getting Washington a point.

In the limited bit of the MLS match that I saw, it was RSL barraging the New York goal with shots, only to find themselves unable to finish. All that seemed to be missing was having Kanu on the field in an RSL uniform so he could miss the net completely from a yard out. It had to be a superbly frustrating loss for Salt Lake, but you gotta finish.

It is what it is, and New York have won the West. Maybe next year, San Jose can win the East. The Red Bulls have earned a trip to the MLS Cup Final for the first time, against the Columbus Crew - who of course have never been there, either. END_OF_DOCUMENT_TOKEN_TO_BE_REPLACED 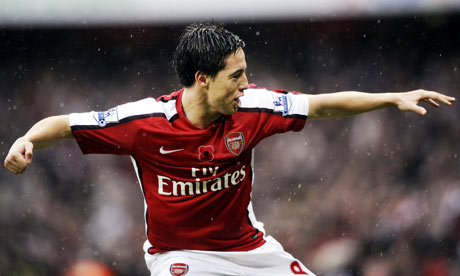 Before I begin exaulting Arsenal’s performance in their 2-1 win over Manchester United, let me just say two things.

END_OF_DOCUMENT_TOKEN_TO_BE_REPLACED

Fighting Talker Podcast #5 is on the air

Ed and Aaron return with an old-school Fighting Talker podcast. Today the guys discuss DC United’s end of season and offseason to come, the MLS playoffs, Arsenal, Hull and even some horse racing.

Wenger is losing it

Folks - you can mark the date down. November 1, 2008 was officially the date when this Arsenal fan jumped off the Arsene Wenger bandwagon.

I think he has officially lost it. His stubbornness and refusal to engage in the transfer market has ceased to be eccentric and has become an intolerable drag on Arsenal’s performance.

To me, this run of results was always coming. Did I think it was going to come before Christmas? No, but with our lack of experienced depth, it was always going to happen. Not replacing Flamini was simply criminal. There is no other way of putting it. If Arsenal’s board doesn’t force him to strengthen this squad during the winter window, it will lead me to to question whether the tail is wagging the dog here. END_OF_DOCUMENT_TOKEN_TO_BE_REPLACED So Arsenal loses to a terribly inferior Hull team and then a few days later comes out and slams Porto, 4-0. Believe it or not, this schitzo’ness is easily attributable. This isn’t some mystical confidence deficit, Arsenal is playing like this for two reasons. END_OF_DOCUMENT_TOKEN_TO_BE_REPLACED

The Hyperbole Award Nominee of the Century

From Young Guns regarding US youngster Charles Renken:

The whole of America is going crazy over his talents which sees him average a goal a game in every fixture he plays, something his Under 9 side had the pleasure of.

Umm, have they been to America recently? I love Arsenal. I know about Charles Renken. But, even I acknowledge that it would take Landon Donovan and Clint Dempsey shooting up a hospital for infirm teddy bears to in order for “America to go crazy” about anything soccer-related.